Welcome To the overseas relatives

the large Szelestey family had its first big meeting on Szeleste, in 2004. Then we met in Ják, on the 750th anniversary of the church of Ják, and also in 2009 in Jákfa. Each meeting brought the family members more and more together. Jákfa is the most ancient home of the Szelestey family. They had already been living there in 1100 for sure. The family members were buried in the church of the village until 1893. A cross had been standing in the village since 1825, which we renovated in 2010.

In 2004 we managed to contact Mrs. Ilona Bendy Szelestey from USA, but we’ve since lost the contact. We can find a lot of people with the surname Szelestey in the American phone book. You have to know, that everyone, who writes their name SZELESTEY (not Szelestei) is a family member. The differences in our spoken languages also mean difficulty, because here, only the young generation speaks English, and in America, only 1-2 older people of our family speak Hungarian.

Now we have decided to send this message to the most places available, because they might be interested in their family’s past. We hope to get in touch with You and get to know Your family stories. This letter was translated by a Szelestey grandchild, Lilla Kukor, who had been living in America for 2 years with her family. Her father, Dr. Zoltan Kukor had been working in UCLA and Boston University during this time. His mother is Ilona Szelestey.
I’ve been researching the part of our family int he past ten years. I am writing a book about our family, almost 200 pages are done already.

Short from my research results: our family origins from the JÁK clan (family from the time of the settlement of Magyars in Hungary). This clan also had two other families, the Niczky and Kemény families. The clan had built a famous roman styled church between 1214-1256.
Between 1199-1201 Mike was the nador (substitute of the king) of Hungary. The first „direct” Szelestey was Csuna in 1221. I managed to make a family tree back to this date.

We know only little about those who emigrated to America. Exept for Mrs. Ilona Bendy Szelestey (mentioned before) we know about Sándor Szelestey, who emigrated in 1900, had two sons, Zsigmond and László. László died in 1909 in Chicago. Zsigmond had 3 children: László, Herbert and Erzsébet. László had 2 children: Olga and Margit. I believe that Szelesteys had been also emigrating to the USA from the 19th century, after the Hungarian freedom battle.

Even if the memory of your mother country is so far away, that you feel no connection to it, I would still like to suggest that the Szelesteys in your country should get to know each other, and maybe there will be someone there also willing to organize a family meeting. This might be a start of togetherness and friendships based on family attachment. I have made a family tree with over 600 family members on it. I would be grateful if You could make your own family tree and share it with me, because then I cound put You and Your Family on the big family tree. I would also appreciate any kind of stories or memories about the family from today or the past.

I wish You good health, and happy, successful life!

With respect and love: 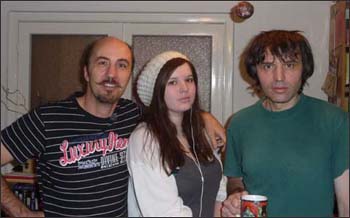 Kukor Lilla (in the middle), her father (on the right), her uncle (on the left)